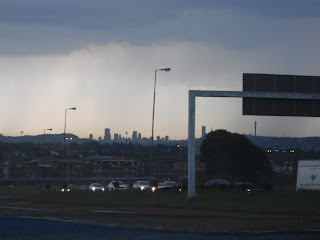 After months of planning and preparing, I finally arrived in Johannesburg, South Africa on January 12th. I was greeted at the airport by a friend's family. They graciously hosted me and helped make the transition to this new country warm and welcoming. I was fortunate to stay with another dear friend Ambrose who was an exchange student at App State last year. His family hosted me for three days and also gave me an incredible introduction to South African culture. While staying with Ambrose I had my first Braai, which is like a barbeque grill but not quite. Braai refers to several thing. A Braai is what you use to cook the meat and bread and you invite friends over for a Braai. Many South Africans have told me that Braai'ing is a lifestyle and I'd have to agree.

South Africans LOVE their meat. I had my first Braai with Amrbose's family and it was amazing!

Another traditional South African meal is a Potjiekos  (Poy-key-cos). They slow cook meat, broth, spices and vegetables in an Iron cauldron over  a fire. It cooks for hours and when it's done it's an explosion of flavors and tender meat that falls off the bone.My initial arrival in South Africa was wonderful. I had amazing hosts and got a glimpse of the rich culture that some of the people in this country hold dear. From Welkom, where Ambrose's family lives, we made our way to the University of the Free State in Bloemfontein where I began my study abroad.
Posted by leedsie16 at 1:42 AM

I've started this blog to help keep my family and friends updated on my experiences while studying abroad in Bloemfontein, South Africa. My hope is that my cultural and travel experiences will offer insight and entertainment to those who read:)